Top 10 Features of Python Which Makes it Great Programming Language 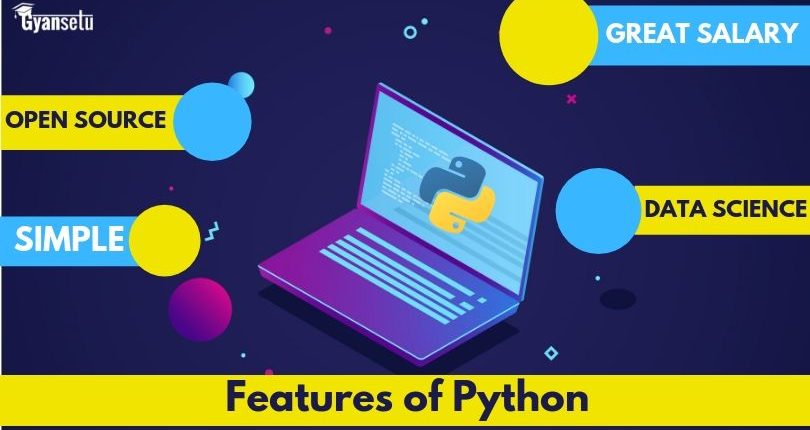 Top 10 Features of Python Which Makes it Great Programming Language

Who runs the world? Developers.

There. I said it.

From the mobile phone, you cannot seem to put down to complex business software, there isn’t anything which isn’t programmed in today’s world.

A developer’s job is as easy as the language he/ she chooses. While there are plenty of programming languages popular in this ever-growing world of software technology, python still remains the top choice.

Before we go any further about how python is the best among programming languages, let us give you a gist about the history of Python.

It was in the 1980s that Python came into existence. It was conceptualized by Guido Van Rossum and was named after Monty Python, a British TV show.  Its first version called Python 0.9.0 was released in 1991.

Python is the Best Programming Language to Learn

The reason why Python is Best Programming Language and why it gained so much popularity was because it was simpler, concise, and more to the point than other languages.

It made the process of coding easier and helped people learn and execute codes quickly and with less difficulty. What is more commendable is that it remained a general-purpose and multi-paradigm language but without the complexities and hassle of other languages.

Due of its clear and concise syntax, python became a top programming language in no time. It was quickly adopted by beginners as it helped them in growing and experimenting.

Simultaneously, its usefulness was recognized and utilized by the game changers of the tech world. It would be interesting for you to know those top organizations like Facebook, Google and Amazon web services were built using python.

In order to understand more about Python’s popularity, we hung out with our core tech team. Surprisingly, they had amazing inputs regarding Python which no textbook would be able to tell you. We would like to mention few of them.

There was more discussion regarding how Python has some of the strongest frameworks in the industry. Similarly, there are many examples of how even non-coders learn Python just for research purposes as it simplifies data mining.

What started in 1990 as a small development in the world of coding has now become indispensable in the race of computer programming.

27 years later, Python is not just in the race but also winning it.

Python comes as a surprise to many who were made to believe that programming was a complex subject. Closely resembling the English language, python is easy to learn and simple to implement. A command that requires complex coding in other languages is just a matter of one–line code in Python.

With its clear syntax, Python makes programming simple even for a beginner. A beginner’s mind molds as that of a developer sooner while working with Python and they’re able to progress towards complex programs quicker than in any other language.

One of the most important reasons for Python’s popularity is free and open-source libraries. You’re free to use these sources and find solutions for your commercial applications. Also, the sheer number of add-ons available can greatly enhance your basic code and cut development time.

Python is one of the most popularly used open-source programming languages in the world. It has been around for nearly 3 decades and has more than enough tutorials, guides, books, and papers dedicated to its learning. There’s no Python issue that a detailed Google search cannot solve.

Machine learning is the future of technology. Now, people expect devices to remember their browsing patterns. Python is the language where most resources are available on the topic of machine learning. Google is the pioneer in this field and python is what was used in that case. Thus, the developers’ communities depend largely on Python for machine learning.

With everything being recorded on devices, data science becomes extremely crucial for the future. As the most preferred language for data analysis all over the world, it has the most trusted sources and libraries where you can find endless information.

As you might have understood by now, Python is clearer and simpler than other languages. A complex process of automation would require a longer code and more time to execute. With Python, a similar command can be executed with a simple code and in a few minutes.

We’re already on the 8th point and we have spoken about many different things Python can help you do. From big data analysis, machine learning to good old website development, there’s no limit to what you can do with Python.

Log onto Google (which is made with Python) and try to find about Python jobs, there’s no dearth to them. Python is an adaptable language which will stay relevant in the coming future. Learning Python is not just beneficial but also a wise move.

We are all in this for the love of programming. At the same time, it always feels great to be rewarded for the hard work you put in. Python developers are some of the highest-paid software professionals in the world, and well-deserving so – we make lives simpler.

To put it all together in few words would be difficult but we would try because our job is to perform complicated tasks in a simple, clear and concise manner; just like Python. With Python, you can optimize your resources to the maximum as it allows quicker development with higher readability.

It is this particular quality of being readable because of simple syntax which also makes review and problem solving simpler in Python.

Even if you’re new to the work of development, you can easily build a project from step 1 as there’s many ready-to-use and tested framework and libraries to fall back on.

Not to forget, the fact that Python has been used by tech giants and pioneers of the tech revolution gives your work much more credibility.

In the past few decades, there have been many changes in the tech world but Python’s position has remained intact. A python coder is never out of job and is one of the highest-paid software professionals in the world.

Python was there when the internet took over our lives. It will still be there when we take the internet to even greater heights. If you’re looking forward to being a part of the programming revolution. Python is where you should begin. Enroll today in Python Training in Gurgaon.