Regression vs Classification in Machine Learning 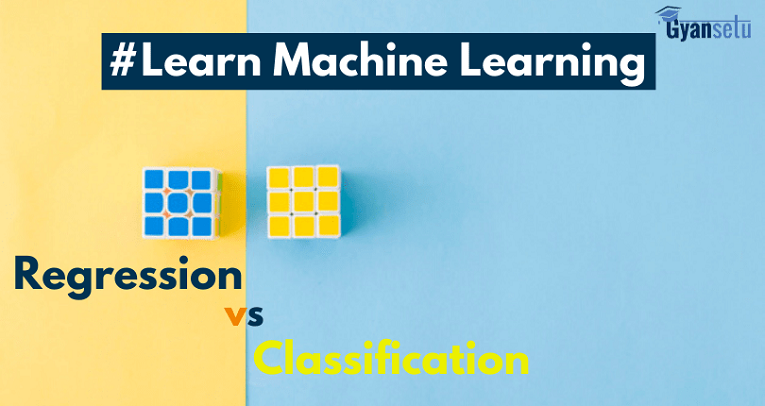 Regression vs Classification in Machine Learning

What is Machine Learning?

Machine Learning is a subset of Artificial Intelligence which lets the machine to discover pattern from the data, draw insights and helps in decision making.

In Supervised Learning, the prediction model is built from the set of training data which is labeled (i.e. data contains both the input and output). Regression algorithms and Classification algorithms are the types of supervised learning.

What is Regression in Machine Learning

The meaning of Regression is any procedure that tries to find the relationship between variables.

When Regression is used?

Regression is used when we want to predict the output variable which is continuous or a real value.

There are different Regression modeling techniques. Among all Linear Regression is the most popular algorithm. It is the simplest form of Regression.

In the diagram below blue dots are the observed data points and the red line is the line of best fit.

In multiple regression, there is more than 1 independent variable.

What is Classification in Machine Learning?

The main goal of classification is to identify the category of the dependent variables based on training data.

The Different Classification Algorithms are:

5 MACHINE LEARNING ALGORITHMS EVERY DATA SCIENTIST MUST KNOW BY HEART

The Logistic Regression finds the probability of a certain class or event. Using Logit Function, it simply predicts the probability of the occurrence of an event. Suppose if we want to find whether the person is diabetic or not based on his age, Blood pressure (bp), and sex.

More formally it can be written as

A Problem where the outcome is of two classes is known as a binary classification problem.

A Problem where the outcome is more than two classes is known as Multi-class classification.

The Types of Logistic regression is

To select the right algorithm for modeling it is very important to understand whether the problem is a classification problem or a Regression problem.

Performance Evaluation of Classification and Regression:

The different metrics for Regression problems are:

Based on this information we calculate:

Accuracy: Accuracy is a number of predictions our model got correct.

Recall: It is the ratio of positively predicted observations to actual observations. The recall is also known as sensitivity.

F1 score: It is a harmonic mean of Precision and Recall.

ROC/AUC curve: It shows the performance of the model at thresholds by plotting a graph of True positive rate against False positive rate. AUC is the Area under the ROC curve.

Log loss: It measures the performance where the prediction input is a probability value between 0 and 1.

To choose the best model for your specific use case it is really important to understand the difference between the Classification and Regression problem as there are various parameters on the basis of which we train and tune our model.