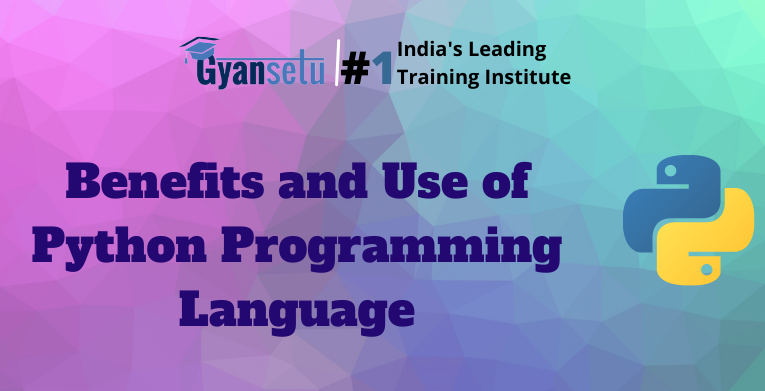 Will you be interested in being a part of the 4th generation technologies and advance your career to a level that will secure your future? If your answer is yes, then learn the programming language called Python. Python has created a storm in the IT world in recent times. Albeit, learning this language will be nothing short of an adventure for you. Still, you may like to know the benefits and uses of Python before taking a final call on this.

According to StackOverflow, Python is the fastest-growing programming language in the world. You will find countries with larger economies are extensively using this programming language. So obviously there are clear benefits of learning this technology.

The demand for data science positions will see a rise of 1581% in the coming years. Python is the most sought-after programming language for data science today. So if you can land in such a profile, you will have a plethora of job opportunities unfolding before you.

Python is the second most compensated coding language, according to Indeed. The salary of a Python developer ranges from $118,626 to $162,223 per annum. So once you are an expert in this language high salaries are bound to follow you.

Python is a high-level programming language with a syntax that reads like English. Therefore, it is much easier to learn the language compare to most other computer languages.

Python is not only easy to learn but also extremely flexible. There are about 125,000 third-party libraries available in Python, you to utilize the language for everything from machines to web development to even bioscience. It is also recommended for data science since its data-focused libraries, like pandas, NumPy, and matplotlib, can store, process, and display data. It's so useful that sometimes it is called the "Swiss Army Knife" of programming languages.

Python is a language approved by OSI and comes under an open-source license. So it is free for use and distribution. You have the flexibility of downloading the source code, change it according to your purpose, and create your Python version. This is a helpful feature when companies want the language customized for a specific function and use their versions for development.

You must have seen that many languages like C/C++ need few changes before you can execute those programs on different platforms. But this is not the case with Python. Python will let you write only once and execute wherever you want.

Python is a highly productive programming language. Python's simplicity allows developers to concentrate on the task at hand. They don't need to spend a lot of time learning the language syntaxes or behavior. You write less and accomplish more.

Python is a secured language for programming. You have to thank a Python security project called OWSAP for that. OWSAP helps developers create a hardened version that gives them the highest level of security in a high-risk environment.

Python is a programming language that is being widely used across all verticals. So data science is not the only option you have you are done with learning this language.

The fields that you can choose includes :

Must Read:- Top 5 Jobs in Trend After Lockdown

Python is popular for its ease of learning and wide acceptance among various industries. So take the joy ride of learning Python today and enjoy both a fun-filled and fulfilled career.