What is Docker in DevOps? How Does it Work? Tutorial Guide For Beginners 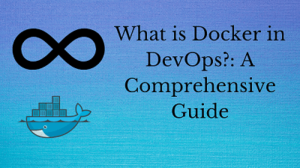 What is Docker in DevOps? How Does it Work? Tutorial Guide For Beginners

There is a lot of technology available today in the market. There are great minds at work daily to bring people the best solutions. This makes competition fierce and allows customers a lot of options from which they can choose.

The most popular amongst them is cloud technologies. They are also many DevOps tools and methods that can simplify routine issues in a software development company. You need to learn about such trends that can help you build products faster.

Developers need to deliver products constantly and services even better than their competitors. This means that many firms are embracing cloud practices and concepts like containerization. This makes DevOps tools like Docker in high demand.

If you are wondering what is Docker in DevOps, you are not the only one. Here we will try to explain the concept simply. We will also introduce some benefits of using Docker that can be helpful for developers and architects.

It is a combination of two words that are, “Development” and “Operations”. It is a software engineering practice that combines software development (Dev) and software operations (Ops) in an organization.

DevOps is a type of tools, practices, and cultural philosophies that enable an organization to deliver applications and services fast. It is a type of ecosystem needed to automate processes between development, testing, and IT teams. This results in seamless building, testing, and launching of software efficiently.

This constant cycle of collaboration and iterative improvement throughout the entire software development life cycle improves the products at a faster rate. This speed of project management leads to improved services to the customer and better performance than the competition.

Some Advantages of DevOps

Docker is a popular Platform As A Service (PAAS) product. It uses virtualization at the operating system-level and delivers software in packages called containers. These make it easier for a developer to create, run, and deploy applications.

What are Virtual Machines?

A virtual machine is a great imitation of a personal computer. It has its memory, CPU, network interface, and storage to act as an actual physical computer. To implement them you may need special software, hardware, or a mixture.

What is Docker Containers?

It is a unit of code that packages up a new code of an application that the developer is writing and all of its dependencies. It makes the application run faster between different computer settings.

A docker image is a small, standalone, workable package of computer code. It has everything you need to run an application on another system. The components include the code, system tools, runtime environment, system libraries, and settings.

Differences Between Docker and Virtual Machine

What is Docker in DevOps?

It is a platform that is a perfect fit for the DevOps ecosystem. It is an apt solution for software companies that cannot keep up with the pace of changing technology, business, and customer requirements. This makes Docker an obvious choice to scale up and fasten operations in a company.

The reason for the success of Docker in the DevOps environment is its ability in containerizing the applications. This reduces the time to develop and release a solution for a software development company.

It is useful in overcoming the challenges of the 'Dev' and 'Ops' environment. It allows an application to run on any application regardless of the host configurations. This enables all the teams to collaborate while working efficiently and effectively.

You can also ensure that a feature is working in the production environment based on whether it is operational in the development environment.

5 Reasons for choosing AWS with DevOps

How it Fits in DevOps?

Docker is a tool that benefits both developers and administrators. This makes it a part of many DevOps (developers + operations) toolchains. Developers can write code without worrying about the system that will be ultimately running the application. They can also use one of the thousands of programs that are developers have already developed to run in a Docker container.

For operations staff, Docker gives them the flexibility to test in a unique environment. It also reduces the cost of investing in multiple settings, as Docker files are of small size and have low overhead.

Many DevOps applications are already using Docker, such as Ansible, Vagrant, Chef, and Puppet. This helps in automating the use of unique environments and the deployment of those environments.

What is Docker Used For?

Let Us Take An Example…

Suppose there is a company that is developing an application in Java. For this, they need to install the tomcat server on the developer’s system. After development, it goes to the tester who will again require a tomcat environment to test the application.

Once the testing is complete, you will need to deploy it on the production server. This too will require tomcat installed on the system to host the Java application. Ultimately, you will need to install tomcat thrice. This is easily avoidable by using Docker.

All you need is to create a tomcat docker image using a base OS like Ubuntu. This is existing online on various websites. Now, you can use this image on all systems, including that of a developer, tester, and system admin.

This way you will get the tomcat environment automatically, solving the problem in a software development company.

What are the Benefits of Using Docker in DevOps?

There are a lot of advantages of using both Docker and DevOps. Both can help you increase collaboration among various teams who are part of the software life cycle. Both offer a broad range of business, development, and technical benefits. Although each has its drawbacks, they fit perfectly together.

Here we list some key benefits of using Docker with DevOps:

Docker is the future of designing, developing, and deploying an application in a simple, affordable, and fast way. It ensures that an application runs post-production, just as it did during development and testing.

Through this post, we have tried to explain what is Docker in DevOps in the best way. It should clear any doubts that you have about the technology.

If are yet to try Docker for yourself, we highly recommend using it to embrace the digital transformation. You will be a part of the diverse set of users that continue to grow every day and benefit from its advantages.