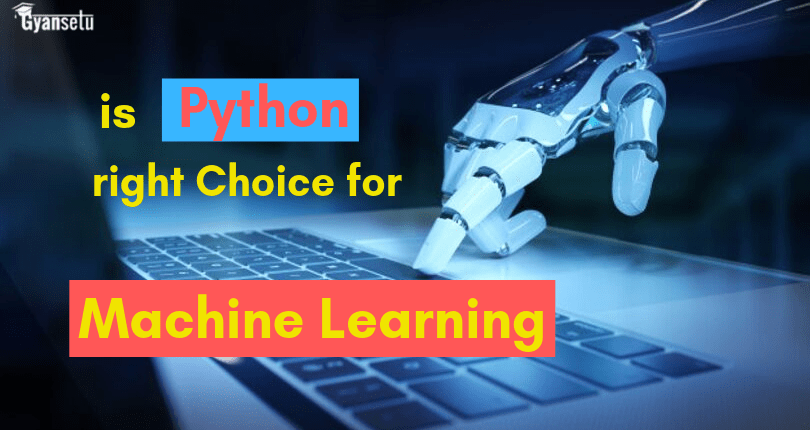 Why Python for Machine Learning?

Let us begin with revealing a study for you.

As per research, Python is the topmost programming language in 2019.  It is user base in only growing due to its popularity in the field of machine learning.

Guido Van Rossum released Python in 1991 to provide programmers with a simpler alternative to complex languages. Little did he know that it is this simplicity that would take Python to the heights it is on today.

“Python is an experiment in how much freedom programmers need. Too much freedom and nobody can read another's code; too little and expressiveness is endangered.” -  Guido van Rossum

In his own words, Python’s father described the reason for its popularity.

In this article, we explore the many reasons for its popularity and suitability why Python is best for Machine Learning.

Machine learning or artificial intelligence is much more than writing codes and their timely execution.  It is a study intersecting statistics, analytics and programming in one potpourri.

Machine learning problems involve complex data, the application of sophisticated algorithms, and arriving at a viable result. Python is simple to code and easy to read language.

These qualities help the professionals by allowing them to concentrate on actual machine learning problems rather than solving the technicalities of complex coding.

Moreover, it has a simpler and more efficient syntax. One can perform a task with a lesser number of code lines as compared to any other language.

The evolution of our software ecosystem involving data science and machine learning started with Google. And, Python is as old as Google.

It boasts of more libraries than any other framework for machine learning and artificial intelligence. For every possible issue related to machine learning, there’s a library.

As a developer, one doesn’t have to spend time on figuring out a problem as there’re already similar cases available in various libraries.

Some of the famous Python libraries for machine learning are –

Almost three decades in the industry have made Python a mature language. It has a strong community all over the world which provides immense support to budding developers.

There are hundreds of YouTube tutorials, online courses and online communities which can help one solve a problem or learn a new topic easily.

Availability of such valuable resources in abundance greatly helps in finding the right solutions and assisting in the entire process.

Python is a favorite of all the top companies of the world. Your favorite websites like Google, Facebook, Netflix and even Instagram use Python in their applications.

In fact, Python is almost an official language at Google. Most of its core search algorithms are written in Python. All the projects related to artificial intelligence and machine learning at Google are undertaken with Python.

The support and validation by these firms provide adequate support, abundant sources and a testimony of its reliability.

Python is highly portable and can run on any platform ranging from Mac, Windows, Linux, Unix and many others.

This helps data scientists who prefer using their GPUs to train their ML model on their own system.

A developer only needs to implement few changes like modifying few lines of code to prepare a separate code for a different platform. Packages like PyInstaller help in writing codes that run on different platforms.

This increases the ease and convenience for the developers.

“Python is the "most powerful language you can still read".- Paul Dubois

Artificial Intelligence and machine learning technologies are a result of group efforts working towards one goal. Even a simple algorithm requires an entire team.

As stated above, Python is highly readable. It is quite similar to your everyday English language. If a line of code is written by one team member, it can be understood, rectified and developed by another team member.

This decreases confusion and helps in more efficient sharing of ideas, tools and work responsibilities

Tools like IPython also provide features like testing, debugging etc which further improves the efficiency of the process.

The purpose of machine learning is to arrive at a meaningful conclusion by extracting raw data. Its nuance lie in crunching and converting raw data in an extremely readable format.

Python has a number of libraries that offer great visualization tools to present the data in an understandable manner with layman terminology.

There are libraries like Matplotlib that helps in creating reports with charts, histograms and plots so that comprehension, visualization, and presentation is enhanced

BUT, IS PYTHON ENOUGH FOR MACHINE LEARNING?

This question is as good as asking if knowing English is enough for writing a thesis.

Python is a programming language that enables the application of machine learning algorithms and concepts in a simpler and faster manner. It is essential but it is definitely not the only skill required.

Let us first understand what Machine Learning is.

As per Wikipedia, machine learning is defined as a subset of artificial intelligence.

It is “a scientific study of algorithms and statistical models that computer systems use to perform a specific task without using explicit instructions, relying on patterns and inferences instead.”

To simplify, you would need to have a command on the following to be a good fit for machine learning study and application.

Machine learning is a complex study that simplifies gazillion data so as to predict and enable machines into performing in a certain way. You cannot be a master of one trade – you need to master many.

However, it can be said that Python is a good way to start your journey into the world of machine learning. It is its backbone and makes the remaining journey simple for you

Python has already established itself as the number 1 language in the programming spectrum.

Artificial intelligence and machine learning are making the world simpler with automation. But, their execution depends on complex processing, coding and data analysis.

Python is the top choice for these sophisticated technologies mainly due to the simplicity it provides. Its simple syntax, high readability, and easy testing increases efficiency and decreases the processing time.

If you’re looking for a way to start your career in machine learning, it is a smart decision to learn Python.

And, if you’re looking for a training institute to learn from experienced trainers, Join Gyansetu's Machine Learning with Python Training Course.